Two years ago I decided to try my hand at podcasting; for almost three months I wrote a story about the city of Lepari each morning before breakfast, and podcasted it before I left for work. Today, we're officially launching the PDF ebook edition of Postcards From Lepari, available now as a digital download from Gumroad, featuring:

- All eighty original Postcards From Lepari stories - plus the Lepari Christmas fable Vidocq & the Thief of Joy - transcribed into glorious print for the first time.
- Eight brand-new original illustrations by Jenny.
- Remastered mp3 audio of all stories.

So come, monsieur; let us go down amongst the chefs and the rats, the thieves and the mechanists, and begin our exploration of the culinary capital of the world! 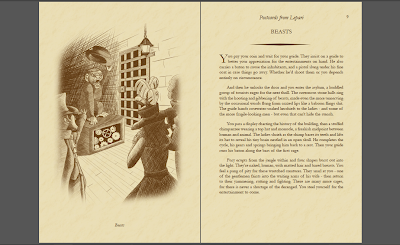 
When I set out to write a novel based around warring chefs, I was faced with the reality that I had very little concept of cuisine. That's not to say that I couldn't cook, but that since my tastes are fairly simplistic I'd never ventured to try many of the more 'advanced' culinary techniques which my characters would be well-acquainted with. So over the past six months or so I've been picking my way through Auguste Escoffier's Le Guide Culinaire, seeing what I can pick up which is both realistic to cook in a modern-day kitchen and that might stretch both my culinary talents and tastes.

I've been focusing particularly on creating and playing around with the possibilities of roux-based sauces, with the intent of working my way through the five 'mother sauces' sooner or later, and when Thanksgiving crept up on Jenny & I last week, it was time to move beyond the béchamel and simple cheese sauces and try something a little more exciting: a suprême sauce!

(Note: I'm not much for following specific recipes, so I won't be providing exact amounts of ingredients and the like. Nor am I much for tradition, so I'll undoubtedly be committing all sorts of culinary faux pas which would get me knifed in some dark Leparien backalley for my crimes against cuisine. Finally, no-one seems to be able to agree on a precise definition of a suprême, so I researched the general concept & creation of the sauce, and can then play around with flavours and so on over the next few months. Damn, looks like I'm going to have to buy more double cream.)

The basic principle of a suprême is as follows:
- Create a roux from equal parts butter and flour.
- Instead of adding milk as you would for a béchamel or cheese sauce, add hot stock to the roux, whisk and simmer for half an hour or so to create a velouté, a velvety stock-like sauce thickened by the roux.
- Apparently the velouté is considered more an intermediary step than anything you would serve to someone for dinner, so once you have your velouté you can turn it into a supreme by stirring in a heavy cream.


I, of course, bastardised the recipe based on whim and experimentation: we served the sauce with pork loin steaks, and as such used pre-prepared pork stock rather than the home-reduced chicken stock typically associated with suprême - Capucine Vaucher would've slipped something nasty into my drink for that slight alone - and I also poured a glass of cheap-ish Chardonnay into the stock prior to adding it to the roux, which made for a pleasant addition. The result: a thick, creamy light-brown sauce which I was so smitten with that I completely forgot to take any photos.

With salt, pepper and lemon juice to taste, it was delicious, if a little overpowered by the artificiality of the over-seasoned stock. I'm looking forward to making some fresh chicken stock one of these days, then I'll have another try at this recipe and see if I can create something a little more subtle.

The First Day of Summer

Season One in Retrospective

Last September I decided to take a leap of faith with my idea of podcasting short pieces of fiction based in and around my fictional city of Lepari. Three months and more than 80 podcasts later I decided that Christmas would be a good time to call an end to the first season of postcards. With Eastercon now behind me I thought this would be the perfect opportunity to reflect on what I learned from the last quarter of 2011.

First off, I now know I can podcast fiction, and given that I wrote most of the pieces over breakfast and podcasted them before leaving for my day-job, I can theoretically produce podcasts to tight deadlines. I say theoretically, since producing one a day as I was doing for much of the above period took up most of my writing time, and in the long term sapped my desire to write. Lesson learned: I can do daily podcasts for a short period, for promotion or for a specific limited-term project. Over a more extended period I'll need to shift to a reduced frequency, perhaps one a week, for a better balance with my day job, novel & comic writing.

Second, I actively enjoy the process of turning my stories into little audio vignettes, and from the feedback I've received people seem to connect with short spoken word stories like these better than they would a few paragraphs of text. A little production seems to go a long way, making even these little postcards satisfying. I may try to add some more direct throughlines of plot into forthcoming stories, so that while each postcard can remain stand-alone, there are more hooks linking one to another.

My intent is to work on outlining the basic premises of Season Two over the next few weeks, then perhaps start with one story a week and see how that suits both my writing schedule and my listeners. If you've got any feedback on what you liked or disliked about the podcasts thus far, I'd be interested to hear, so please leave me a comment.

Thanks for all your support so far, and I'm looking forward to working on Postcards from Lepari again!
Posted by Rob Haines at 23:01 No comments:

Vidocq & the Thief of Joy

In the spirit of the season, I thought it was time to try a more extended podcast story. To wit, I hope you enjoy Vidocq & the Thief of Joy!

Thanks for your continued support, and Merry Christmas to all!

Rob Haines
Rob is a speculative fiction writer with a number of science fiction and fantasy sales to his name. He is currently working on an alternative history novel set shortly after the failure of the French Revolution.